I had used the alcohol ink marbling technique on a snowflake boarder card, and decided I wanted to give it a try in reds for Valentine's Day. Unfortunately, I didn't really have a red, only pink. Needless to say my vision quickly turned to disappointment. However, I thought I'd give it a go anyway and while it wasn't exactly what I had in mind, I found the results satisfactory.

The background came about by loosely scribbling three shades of distress ink markers to create an ombre effect, then using a flat brush with clean water to blend. I've tried doing this before but had some difficulty making it blend nicely. I found that if I allowed the markers to dry completely before adding the water I ended up with a streakier look that had distinct lines where the marker was applied. In the card, I applied the water as soon as the cap was on the last marker and was incredibly pleased to see the results I was looking for.

The greeting was die cut from the same watercolour paper several times and glued together to add some dimension. I used the mid-tone shade without water to colour the word, then applied glossy accents to make it really pop.

The "you" was heat embossed with white on the same marble paper the hearts came from then trimmed and applied with foam tape. 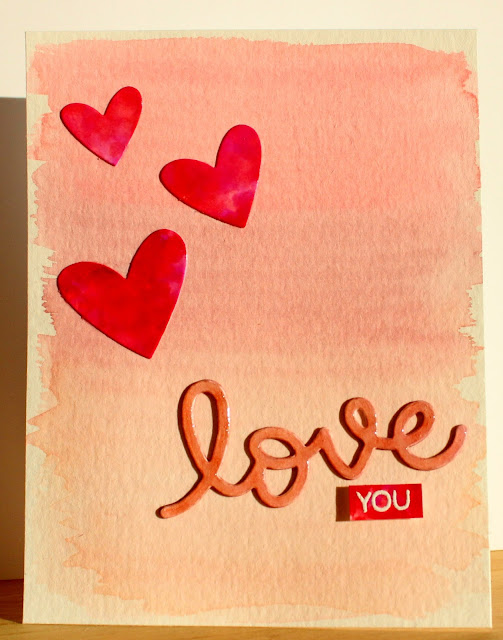