Single Layer Thanks on Craft


Now that the Holidays are nearly done, I have been able to give a little bit of love to all the non-Christmas stamps that have been waiting so patiently for me.

I have been finding an increasing need for Thank you cards, a few times a week I'm hunting around through my stash of cards for something that shows my appreciation. Needless to say, that stash is getting depleted at an alarming rate.

That being said, today's card is a sweet single layer thank you card, coloured with PrismaColor pencils.

The cat has three shades of orange and the puppy has four shades of brown, the hearts were coloured with two shades of red then covered in glossy accents to make them shine and give just a touch of dimension. The greeting is coloured in the same shades of red with the darker of the two at the bottom, creating a suble ombre effect that wasn't really picked up by the camera. To ground the image I used four shades of green to create a grassy effect. 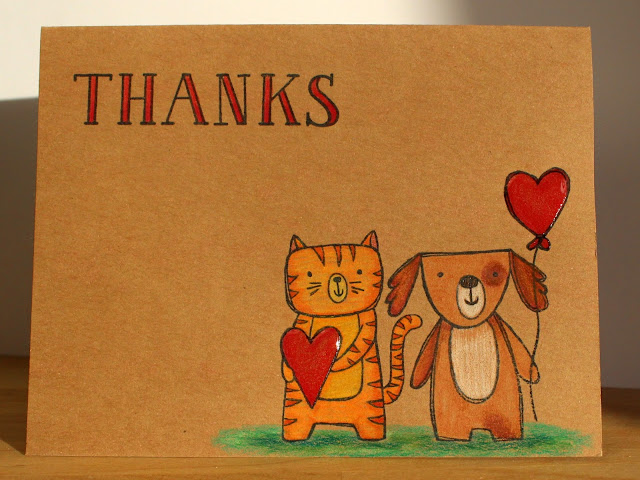 PrismaColor pencils on craft cardstock with glossy accents on the two hearts.