Hi everyone, thank you for stopping by. I hope you are having a great day.

For today's card, I wanted to do something that had not one, but two ways to interact with it. When I started out I knew basically what I was going to do, but having never seen a card like this before, I was a little unsure on how to proceed.

Like any endeavor that seems big or overwhelming at the time, all you have to do is take it one step at a time. And that is exactly what I did.

I'm going to work this post a little differently, and at the end you'll see why. So please bear with me.


I wanted the princess to be behind closed doors, and then have the portcullis as a moving element that you could slide up and down to show the princess behind, inside the castle walls.

To begin, I cut a basic castle outline out of my regular cardstock and used a brick stencil to add the texture. I then cut out a piece for the doors and used a wood grain stamp to make the front and back of the doors look like wood. It is important to do the back, as you will be able to see them when you open the doors.

For the background I die cut some clouds and a sun, and adhered them in place. I used foam tape to create a slider channel behind both the castle and the background sky for the portcullis to slide up and down.

I stamped the princess and did all of the colouring onto a small paper that would fit behind the door. I could have done this directly on the card base, but I didn't want the Copics to bleed through. If that is not something that bothers you, then by all means you can skip this extra step.

The small princess piece is adhered directly to the card base, then I put the panel with slider in place over top. So when you pull the tab at the top, it looks as though you are raising the gate as you can see in the picture above.

Before I show you the finished card, I want to show you what happens when you are careless. I had considered leaving this part out, but then I thought it would be beneficial to see the mistake I made and what I did to fix it. 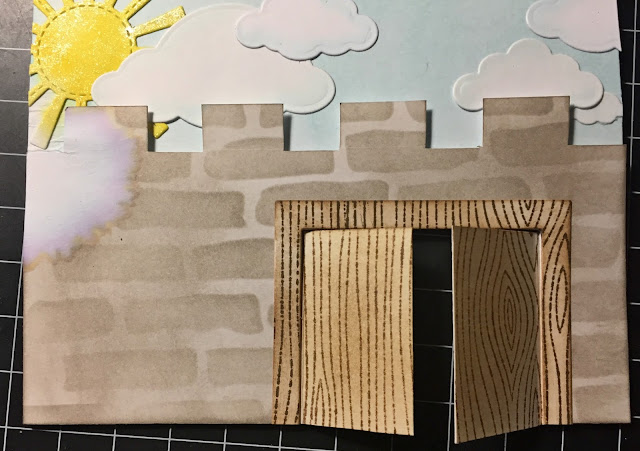 Before I had figured everything out, I had to put the card aside. Being distracted and careless, at some point I had tossed a baby wipe to the side as well. As you know a baby wipe will destroy anything with Distress Ink. I was so upset. The wipe had sat there for long enough to leech the colour out of a large portion of the card, as well as warp the cardstock and frazzle the edges. I thought I was going to have to toss it.


Fortunately, I was able to recover the card by adding a banner to the edge. It doesn't seem out of place because of the romantic view we have of castles and princesses, and it was able to cover up my glaring mistake very nicely.

To create this banner, I used my VersaMark Pen and did lines around the borders and then heat embossed it with gold powder. I then used my Distress Inks to make the banner the dark crimson we all associate with the time period; when that was completely dry I used the same gold embossing to add the greeting.

I am hoping that my mistake will encourage you to find a way to salvage your piece instead of throw it out in utter frustration. Believe me, I have been there. I think the reason I was so reluctant to toss this piece, was because when this happened the only thing missing was the princess. I had all ready put so much work into the mechanic and the colouring and design that I would probably have actually started again.

Thank you for sticking with me through this post, I know it is a long one. I hope you like today's card and are inspired to create something of your own. Don't forget to follow me over on the right sidebar so you don't miss any future posts. Toss me a line in the comments section below and let me know what you think, or let me know about any "whoops" moments you have had and how you fixed them.
Posted by Trina De Zeeuw at 10:52