Hi everyone, thank you for stopping by, I hope you are having a great day.

Today I have a super cute card that features a couple sets from Lawn Fawn (surprise!!!) as well as some masking, distress ink blending, and micro-dimensions.

To clarify, Micro-Dimensions is something I just came up with between sips of coffee this morning. So bear with me if this is all ready a thing and I just don't know about it. Started a new binge on the Netflix last night and I am tired. This is a long post, so hang in there (hahahahaha) but I promise it will be worth it. 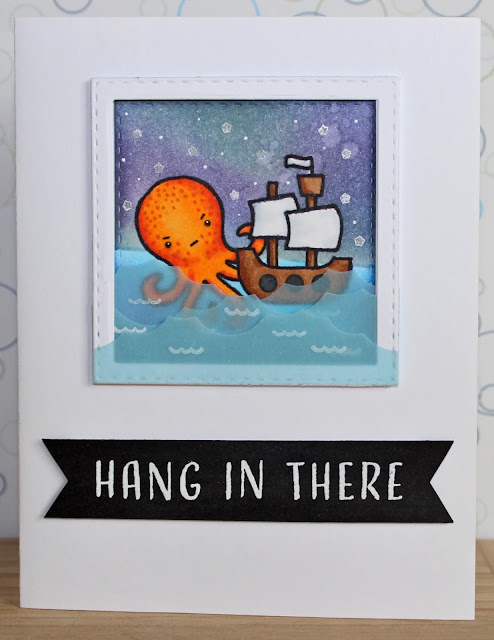 To begin, I used two nesting stitched square dies to create a frame and a base layer for my focus point. I ended up cutting 3 frames, and using the largest die to cut 2 squares of blue vellum for the waves.

For the "wave" look, I used the other side of the smallest stitched cloud border dies from Lawn Fawn.

I first stamped the ship from the Ahoy, Matey stamp set, masked it off and then stamped the octopus from the Octopi My Heart set. I had to mask out his face during stamping because he looks all cute and sweet and I wanted him to look grumpy. I then coloured the images using Copic markers and redrew his face in using my black glaze pen.

I masked both the images again and used Distress Ink to create a basic blue for the sea and the Starry night sky in the background. I used the silver Delicata ink for the stars.

Now comes the assembly and the micro dimension. I adhered the tallest and farthest back wave piece to the back of the first frame piece. I then adhered the second or middle wave piece to the front of that same frame. So there is only one piece of paper width between the two waves. I then adhered two frames together and added the foremost wave so it was on the outside of the frames.

I adhered the frames over top of the panel to create the entire framed image. I couldn't believe how much dimension this gave to the image with only a little bit of space between the pieces.

I had considered leaving it like that, but I wanted something clever for the greeting, like "Don't worry, things could be worse" or "Hope your day gets better". In the end I settled on "Hang In There" Which is stamped using CTMH "Etched Alphabet" stamps, heat embossed on a black piece of cardstock.

I hope you like today's card and are inspired to create something of your own. Don't forget to follow me over on the right sidebar so you don't miss out on any future posts. Toss me a line in the comments section below and let me know what you think.
Posted by Trina De Zeeuw at 11:20